Nalanda University launched its Architectural Design Competition in 2012 for the Master Plan of the campus and architectural design of buildings and facilities that will come up in Phase-1 of its development. The total of 79 entries received were examined by a Selection Committee which declared 8 of them as pre-qualified for participation in the main competition. Five amongst these entries were top international design firms with the likes of Fumihiko Maki and Snøhetta.

An international Jury comprising four renowned architects and three members of the Governing Board of the University was constituted to assess the submissions by these eight pre-qualified architects.

Since it is the endeavour of the University to develop a sustainable campus which will have a net zero or near zero environmental impact, the first of its kind in the world; special attention was paid to the manner in which each of the schemes addressed the issues of sustainability. Vastu Shilpa Consultants were selected as the winner of this competition.

Positioning through self-referential accretion Nalanda University is envisaged as the campus of the future, positioned at the forefront of global education and the hub of intellectual excellence. Equally, the master plan of the campus must be an iconic beacon that attracts global attention for adopting sustainable methods to achieve social and economic integration with the local community.

The location of the campus, in a predominantly agricultural area, implies a larger impact on the adjacent areas. It is bound to transform the land use pattern of the surroundings through the creation of supporting infrastructure and linkages, resulting in the creation of a large tract of gated islands within the ever-expanding sprawls, disrupting natural connections between surrounding villages. This, in turn, will impact the very survival of the farmers with small land holdings.

The master plan integrates sustainable practices at every phase of the project, from site planning of the campus through the creation of infrastructure, cost-effective ways to both reduce consumption of natural resources and minimize dependency on off-site building materials. The plan allows for incremental growth and flexible expansion and phasing, while preserving the agricultural and environmental basis of the region.

The intent is to create a model campus plan that aims to replicate the spirit of Nalanda that endured in its relevance for 800 years by embracing environmental strategies that are simple, efficient, and appropriate to the place. 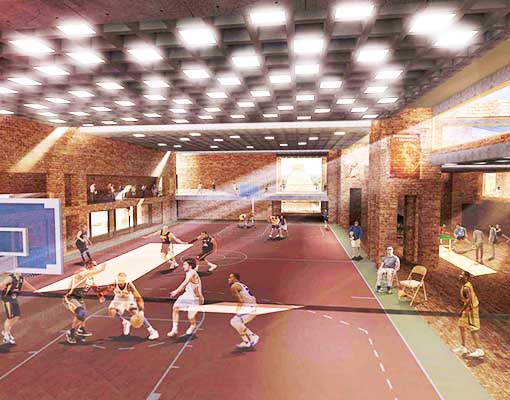 There is a need for the university to engage with inhabitants from surrounding villages by opening its doors. To ensure ecological and economic sustainability of the region, a large part of the campus is reserved for development and dissemination of information about modern practices in agriculture and biotechnology.

The whole master plan in itself is transitional, as it demonstrates the integration of the campus into a large eco-system of the site. The plan aims to combine state-of-the-art technologies with planning principles of erstwhile Nalanda University to create a carbon-neutral and zero waste campus.

The soil collected from excavation of the lake and other water features can be used for producing compressed stabilized earth blocks. In addition to these principles, there is a whole palette of ideas operating at different scales, from the scale of individual cluster, to the scale of the campus, to the scale of individual building. The ideas include the cooling as well as cleaning of air through the use of selected native plants, deployment of dry draft cooling towers to create a microclimate that averages around 25 degrees centigrade regardless of ambient climate, and use of photovoltaic panels over the central lake to reduce evaporation losses as well as allow optimal efficiency by remaining cool. 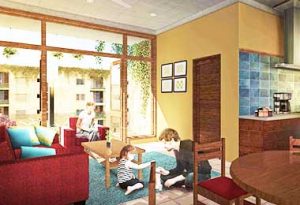 As the lower soil strata is ideal for compressed stabilized earth block (CSEB) masonry as super structure and Burnt brick masonry as foundation.

Generative principles that define the master plan include ecological integration with the natural setting, diversity of land uses, and permeability through the site, dense and compact character of the built form, visual cohesiveness, and scale compatibility with the surrounding land subdivisions.

A 455-acre campus is planned for an eventual 7000 population. It is composed of three primary land use elements: the academic facilities, student/staff housing, and the campus preserve to advance agriculture as the area’s major economic engine.

Like many historic settlements, a lake forms the epicenter of the campus. After careful analysis of the terrain and the flooding pattern of the site, the creation of a manmade lake that feeds on a network of storm water channels was suggested. By using permeability as the main theme, the plan seeks to accentuate the existing linkages that pass through the site connecting the surrounding villages.

The different components of the campus are clearly articulated as interconnected clusters grouped around the lake. All the buildings are positioned along the water networks, thus creating a generative system that can grow in small increments. Each cluster could be developed separately and independently. The balanced public space structure, together with a diverse program and sustainable infrastructure systems, create a high quality environment with a near-zero to positive total energy.

By limiting vehicular access to the perimeter of the site, the plan enables 80% of the campus to be reached by walking within 10 minutes. Combined with pedestrian and bicycle friendly pathways, this network connectivity links academic facilities with residential quarters, recreational facilities, green areas, and cultural amenities. Electrical or bio-fuel vehicles will transport people around the campus.

Sustainability is more than deploying high-tech energy saving methods. Fundamentally, it is addressed through orientation of buildings along a north-south direction and surrounded by water features reminiscent of the Nalanda ruins. The campus grid is angled to maximize cooling breezes off the lake. The plan allows for infrastructure implementations in phases.

Sustainability is more than deploying high-tech energy saving methods. Fundamentally, it is addressed through orientation of buildings along a north-south direction and surrounded by water features reminiscent of the Nalanda ruins. The campus grid is angled to maximize cooling breezes off the lake. The plan allows for infrastructure implementations in phases.

One of the most important aspects, and a key sustainability strategy, is the high-level of programmatic flexibility of the academic complex. The volumes housing various academic programs are linked through verandas and covered streets (i.e. the ‘bazaars of knowledge’), intercepted by rhythmic courts. This system allows the ‘cloisters’ housing different academic disciplines to be built independently and incrementally according to the requirements. The ‘cloisters’ can be extended, should additional floor areas be required.

This building typology is reminiscent of the basic arrangement of monasteries at Nalanda ruins in terms of scale and grouping.

The student hostel, like the Viharas of Nalanda represent a very compact unit. Each cluster caters to 80-100 students where the central chowk is defined by a large Banyan or Peepal tree. While the chowk represents the semi-public of each cluster. The public spine along the central wet lands connects all the clusters and the amenities together.

The central spine is envisaged as the most active part of the campus. It connects the Academic Spine with the library and the other student amenities beyond. The spine is characterized by different shops, cafes, chattries, etc.

This building typology is reminiscent of the basic arrangement of monasteries at Nalanda ruins in terms of scale and grouping.

Facilities provided will include:

Facilities provided will include: 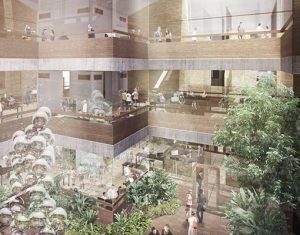 Because of the history of Nalanda University, RSP researched on Early Buddhist Architecture, Traditional Northern Indian Architecture and the Nalanda Ruins. It applied the good design principles of these traditional building forms for planning the layout. For example: