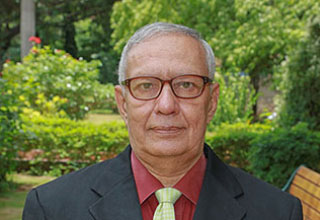 Professor Sukhbir Singh is an eminent scholar in Comparative Literature and Yoga Philosophies. He retired from Osmania University, Hyderabad (India) as Professor Emeritus after serving for more than three decades. He holds a Ph.D. from the Central University of Hyderabad and an M.A. from the Punjab University, Chandigarh. Prof. Singh has specialized and taught Comparative Literature and Yoga Philosophy over a long period. He is actually one of the most accomplished Professors in his field today in India. He was awarded the Senior Fulbright Visiting Fellowship at the prestigious Divinity School of the University of Chicago, IL. by the United States Educational Foundation in India, Pierce Loughran Visiting Scholarship by the Yeats Society of Ireland, Senior fellowship for Outstanding Persons in the field of Culture by the Council for Cultural Resources and Training (CCRT/MoC), New Delhi (India). He has attended seminars/conferences, presented papers, lectured widely in India, U.S. Ireland, Thailand, Nepal, and published books and about a hundred research papers in some of the most prestigious Asian, European, and American journals. Eminent American scholars such as Harold Bloom (Yale), Garry Hagberg (Princeton), and Victoria Arons (Trinity University) have included his research papers in their anthologies. As an Associate and Visiting Fellow at the Indian Institute of Advanced Study (Rashtrapati Nivas), Shimla, Singh worked on his UGC sponsored Major Research Project, “Philosophy of Yoga” and its publication in a book form. Three chapters of the book manuscript have been showcased in research journals from Princeton, Cambridge, and Georgia Universities. Singh has visited several Indian universities as Visiting Faculty such as IIT Madras, Hyderabad Central University, Hyderabad, National Law University (Nalsar), Hyderabad, Mizoram Central University, Aizawl, and Nalanda University, Rajgir, etc. He is currently on the Boards of Studies and Academic Councils of some of the well-known universities in India. Recently, he was invited by Harvard University to participate in its World Literature program at Bilgi University, Istanbul (Turkey).