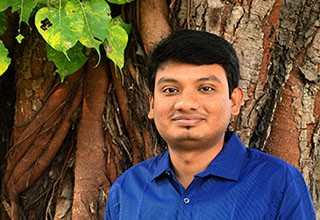 He teaches courses on pre-modern North India and the Deccan, introductory course on Asian history; along with specialized courses on Sufi and Bhakti traditions, historical understanding of Asian interconnections and Asian societies, pre-modern West and Central Asia.

He has supervised Master’s dissertation on topics ranging from local religious cults, Mongol history, history of women, history of the Malabar region, Sufi and Bhakti traditions, cultural history of Bhutan, textile manufacturing and trade, history of weapon production and and warfare, social history of poet Annamacharya, history of Assam, Sufi shrines, and architecture.

Kashshaf Ghani was trained in history from Presidency College (Calcutta), and the University of Calcutta. He received his PhD in History from the University of Calcutta. He has held research position at the Asiatic Society, Kolkata as the first Sir Amir Ali Fellow; postdoctoral research positions at the University of Sorbonne-Nouvelle, Paris, as the inaugural Perso-Indica fellow, and at the Zentrum Moderner Orient, Berlin. He is currently pursuing his postdoctoral research on transcultural and transregional connections between Muslim communities in South and West Asia. He has traveled extensively to deliver lectures in universities in Asia and Europe.

He received a grant from the United States Department of State Educational and Cultural Bureau to study religious pluralism in the U.S. as an academic visitor in summer 2018.

He is currently working on a monograph from his doctoral dissertation. His publications range from edited volumes to articles in peer-reviewed journals, books and conference volumes. He has been a part of SEPHIS (South-South Exchange Programme for Research on the History of Development based in Netherlands) for over a decade and is currently associated with it as an adviser.

He has held teaching positions at the Aliah University and the University of Calcutta. He has also co-taught a course on Global Asia at the New York University-Shanghai.