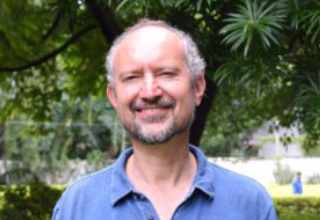 Dr. Antonino Raffone completed BSc, MSc and Ph.D. programmes in Psychology at Sapienza University of Rome, and the European Diploma in Cognitive and Brain Sciences. He holds a position of Associate Professor at the Department of Psychology of Sapienza University of Rome, Italy. He has previously had positions of Lecturer at University of Sunderland (UK), of Senior Researcher at Leiden University (Netherlands), of Visiting Researcher at RIKEN Bran Science Institute (Japan), and of Visiting Professor at Allahabad University (India). Both research and teaching of Dr. Raffone have interdisciplinary and multi-method bases, and are mainly focused on consciousness, mindfulness meditation, attention, wellbeing, and their neural correlates, with different methods of investigation. Dr. Raffone also originally integrates knowledge and insights from contemplative wisdom traditions and Buddhist psychology with cognitive and affective neurosciences. Dr. Raffone has been author of several international research articles on these topics and related aspects, including publications in the “Journal of Cognitive Neuroscience”, “Psychological Review”, “Journal of Neuroscience”, and “Consciousness and Cognition”. In particular, he has edited a theme issue of “Philosophical Transactions of the Royal Society B” on perceptual awareness. He is co-founder and President of “Consciousness, Mindfulness, Compassion – CMC – International Association”, Vice-Director of ECONA Interuniversity Centre in Italy, and in the Advisory Board of the “Mind & Life Europe” association. He has supervised over 20 PhD students and 5 post-doc researchers. He has recently coordinated an international research project on the neural bases of meditation and consciousness funded by BIAL Foundation (Portugal), and has been involved in two projects funded by the European Union. Dr. Raffone is active in promoting practice of mindfulness and meditation in several contexts, including prisons, governmental organizations, international organizations, and related research. He has organized several international events about mindfulness, including two events of the International Conference on Mindfulness (ICM) series, and directs the post-graduate courses on “Mindfulness: practice, clinical applications and neuroscience”, “Compassion: practices, applications and neurosciences”, and “Mindfulness and wellbeing at school” at Sapienza University of Rome. Dr. Raffone started to study and practice Buddhism and meditation in 2004 with Prof. Peter Harvey, and then became a dedicated Soto Zen Buddhist practitioner (with Ven. Dario Doshin Girolami), tradition in which he received a lay ordination in 2009. He also assists Prof. Henk Barendregt in Vipassana meditation retreats.

Course offered (Open to all)

The course addresses consciousness studies and its convergences with Buddhist psychology, as also related to recent developments in cognitive and affective neurosciences. Different areas of consciousness studies will be considered, in an interdisciplinary perspective, as related to the human conditions of suffering and happiness, and to key brain systems for emotion, motivation, and self, with their neuroplasticity. The psychology and neuroscience of meditation and mindfulness will also be considered. The great Buddhist teachings about the Four Noble Truths,the five aggregates, the five hindrances, dependent origination, mindfulness, and different facets of meditation, will be understood in light of recent developments in psychology and neuroscience of consciousness, meditation and mindfulness. The implications of mindfulness and compassion training for relevant wellbeing, clinical and educational applications in society will also be considered.