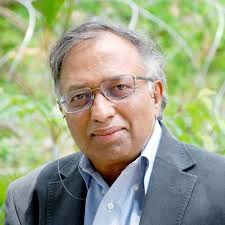 Dr. Vijay Bhatkar is one of most acclaimed and internationally acknowledged scientists of India. He is presently the Chancellor of Nalanda University. In this responsibility, he has committed himself to resurrecting the glory of ancient Nalanda, in the context of 21st century. Prior to Nalanda responsibility, he was the Chairman of Board of Governors of IIT Delhi from 2012 to 2017. He is best known as the architect of India’s national initiative in supercomputing, where he led the development of India’s first supercomputer Param in 1990, under the technology denial regime. Currently he is steering the National Supercomputing Mission of developing Exascale Architecture Supercomputing for India. Dr. Bhatkar is also widely known for bringing ICT to the masses through a wide range of path-breaking initiatives, such as the celebrated GIST multilingual technology covering India’s 22 official languages with 10 diverse scripts that has dissolved the language barrier on computers once for all; MKCL’s computer literacy programme that made a world mark by creating 10 million computer literates within a decade; Education to Home (ETH) initiative for bringing the benefits of ICT to school education. In the 80’s, Dr Bhatkar substantially contributed to the ushering of electronics revolution in India. He is also credited with the creation of several national research labs and institutions, notably amongst them being C-DAC, ER&DC Trivandrum, IIITM-K, TechnoPark, MKCL, IsquareIT, ETH Research Lab and Multiversity. Simultaneously, he has mentored several innovation-based start-ups.

Dr. Bhatkar has served as a member of the Scientific Advisory Committee to PM, Member of the Governing Council of CSIR and a member of the IT Task Force constituted by PM in 1998. He is a Life Fellow of IEEE (USA) and Fellow of ACM (USA), besides being Fellow of CSI, INAE, IETE, NASI, MASc and GES. He has served as the Chairman of e-Governance Committees of Maharashtra and Goa. Dr. Bhatkar has authored/edited over 12 books and 80 technical and research papers and addressed several university convocations, international and national conferences and conventions and public functions. His ground-breaking articulations have been widely covered by both print and broadcast media. His current research interests are in supercomputing, artificial intelligence, brain-mind-consciousness, and synthesis of science and spirituality.

Dr. Bhatkar was conferred with Krishi Bharat Ratna Award in 2017, Padma Bhushan Award in 2015, Padma Shri Award in 2000, Maharashtra Bhushan Award of 1999-2000. He is the recipient of the prestigious Jindal Prize 2012 for science and technology in the service of society. He was conferred with the Saint Jnaneshawar World Peace Prize 2010 by World Peace Centre. He was also nominated to the Petersberg Prize 2004 and was conferred with the prestigious Dataquest Lifetime Achievement Award 2003. Dr. Bhatkar has been showered with a string of awards, notably amongst them being Adi Godrej Award 2010, C-DAC Oration Award 2006, KG Foundation’s Personality of the Decade Award 2004, PGCIL Award 2001, Om Prakash Bhasin Foundation Award 2000, Global e-Biz Award 2001, FICCI Award 1999 for Excellence in Engineering & Technology, Lokmanya Tilak Award 1999, Rotary Excellence Award 1997, Pune’s Pride Award 1996, H.K. Firodia Award 1996-97 for Life-Time Achievements in Science & Technology, Distinguished Alumni Award 1994 of IIT Delhi, VASVIK Award 1993, and Electronics Man of the Year Award 1992 and many more.

Dr. Vijay Bhatkar is presently Chairman of the Oversight Committee, Science and Engineering Research Board (SERB) as well as Chairman of Unnat Bharat Abhiyan of linking India’s leading Universities and institutions to 6.4 lakh villages for their integrated development through scientific and technological interventions along with cultural and spiritual awakenings, Founder Chancellor and Chief Mentor of Multiversity, Chancellor of D. Y. Patil University, and National President of Vijnana Bharati. Dr. Bhatkar did his Ph.D. in Engineering from IIT Delhi in 1972. He has been conferred Honorary D.Sc. (Honoris Causa) by Dr. D.Y. Patil University. Ph.D. by Gujarat Technological University and D.Litt. from Nagpur University. His life mission is to bring about a synthesis of science and spirituality for the service of humanity.